Is the PSPRS Pension Bankrupting Mesa and Other Municipalities?

$100 million handout to ASU by Mesa Mayor is just wrong

My opponent supports raising Mesa sales tax by 23%.  This must be approved by voters and will be on the November ballot.  There are primarily three reasons why I do not support raising the Mesa sales tax from 1.75% to 2.15%.  When a government entity whether it be a city, county, state, or federal says they want to raise our current tax rate by 23% everyone should be paying attention.  The first reason is a lot simpler than the other two.  We should not be bundling public safety and education when asking voters to approve a 23% tax increase.  The second reason is multiple studies show we are in a higher education bubble.  When this bubble bursts one has to ask if the city of Mesa has built-in protections against the higher education occupants of these buildings that we’re all subsidizing with our tax dollars.  Xavier just did this same exact thing in downtown Gilbert and the taxpayers in Gilbert were left footing the bill – http://www.azcentral.com/story/news/local/gilbert/2016/05/31/gilberts-saint-xavier-university-close/85207474/.  The last reason I do not support this 23% tax increase a little more difficult and will take some time to explain.  In summary, we have a special interest group buying our city council candidates.  They buy them because they can then use them, once elected, to raise taxes rather than address the insolvent public safety pension system.  This needs to be fixed at a state level.  Instead of dealing with the reality that they bankrupt the system they would rather raise taxes and force our city into more debt through unfunded liabilities.  I believe we need to face this issue head-on.  But we cannot do this without first addressing that the leaders of the system have purchased our council candidates.

Why this is another taxpayer bailout

I will prefix this by stating that our public safety personnel are critical to a well-functioning city but the problem is their leadership has failed them. Unfortunately, the money is gone and nobody wants to talk about it. As we’ve come too familiar with in politics we just try to patch the issue.  The problem is with the PSPRS (Public Safety Personnel Retirement System) management. We as taxpayers in Mesa and every other municipality have already funded the retirement system through taxation. So much so that in the early 2000’s it was almost 130% funded. The pension was gambled away and all of the assets were put at risk. Now to date it is somewhere around 50.13% funded and that is assuming a 7.5% annualized return, which is also not realistic given central banks imposing negative interest rates around the world.  Some estimates have said this system is as much as $49 billion in the red.

We should ask, why are none of the politicians and leaders of PSPRS watching out for the beat cop and firefighter who risk their lives every day to protect us?  Our leadership has bankrupt their pension and if elected I would demand we investigate and file a lawsuit against those who have a fiduciary responsibility to watch out for our public safety workers.  These men and women risk their lives every day.  The last thing they should have to worry about is if their pension is going to be there when they’re done serving our community. 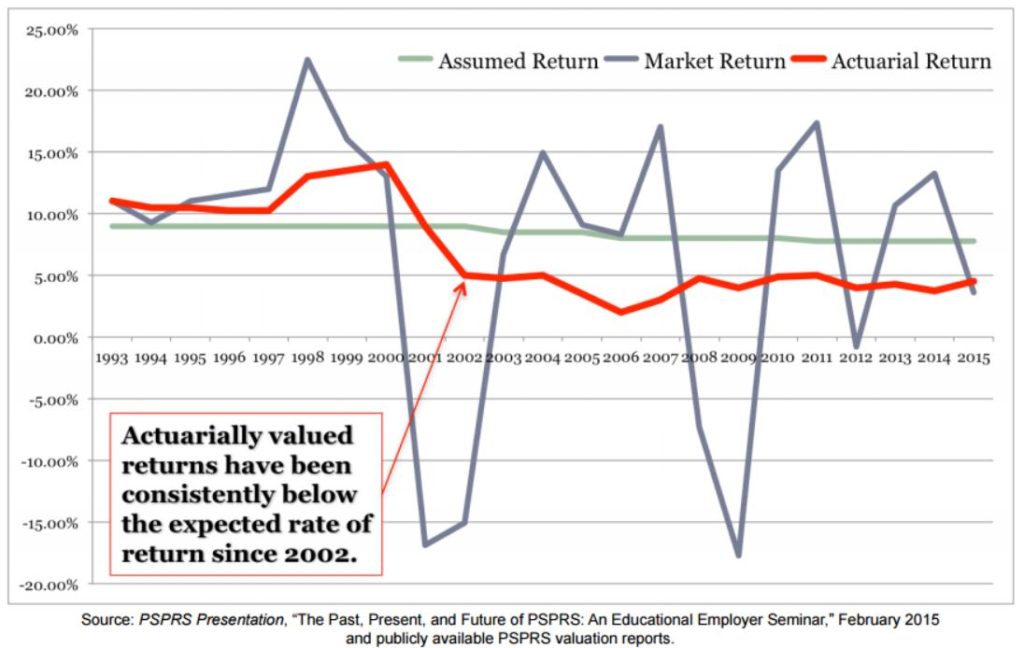 This loss of capital by the pension management has created a huge unfunded liability for the city, as the city is on the hook to refund these lost funds. This also becomes apparent when you look at the skyrocketing cost of hiring a new public safety official. This simple chart shows the drastic increase in cost for a public safety worker over the last 10 years. The majority of this is due to the pressure of the pension system in which the funds were gambled away by the leadership.  I should be clear, this is not the fault of the men and women who defend our city every day.  This is the result of reckless gambling by the leadership of this system.  The state legislature needs to fix this before it is too late. 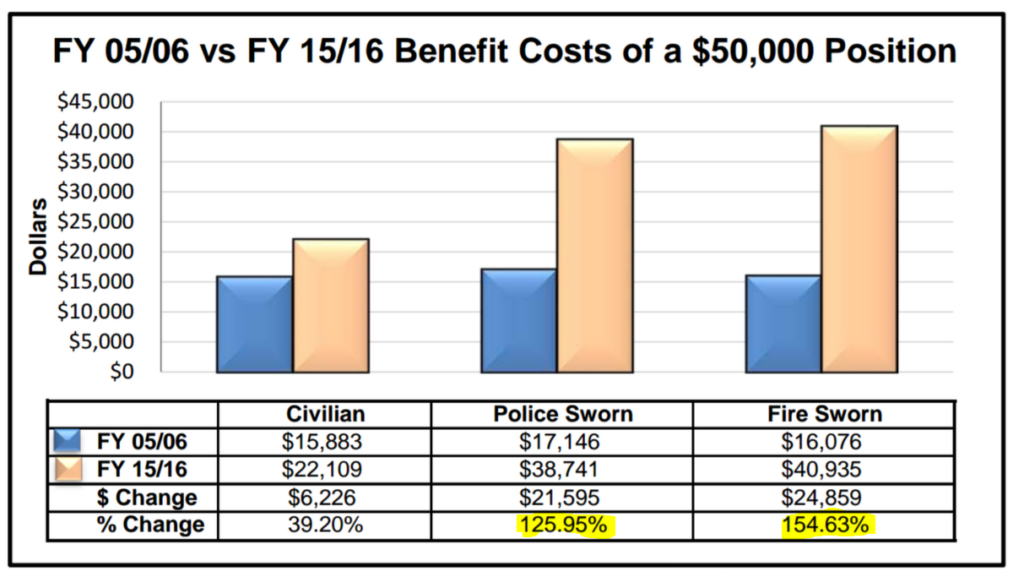 Did the state legislature make this problem worse?

As bad as this situation is the state legislature this year passed SB1428 which allows for new public safety workers to opt out of the pension system and into a 401K like program or tier.  This relinquishes their responsibility to support any public safety worker hired prior to 2012. If you are a public safety worker and were hired prior to 2012 you should be paying attention to what this does.  It does not take a highly intelligent person to figure out what happens to a pension system when it’s 49% funded and $6.5 billion in the red and new public safety workers can opt-out. The system gets top-heavy when older workers retire, then the system collapses. Here is an example of what happened when the city of we got rid of the elected official retirement pension or EORP. It took 2 years but you can clearly see as the older workers retired the unfunded liability jumped off the charts. Luckily the membership in this system is EORP pension is low. That is not the case with PSPRS which is billions of dollars.  Furthermore, it is important to note that the new hires under SB1428 are only responsible for their own tier of unfunded liabilities.  This almost guarantees the system will collapse and municipalities around the state of Arizona will be on the hook for billions of dollars of lost money.  Public safety workers hired prior to 2012 will be hurt the most.  As soon as this system begins to collapse the municipalities will all push back and will have no choice because of the strained budget.  We have got to demand that a full investigation is done to recover the funds that were gambled away.  Our public safety workers deserve better.  They should not be risking their lives every day only to find out their pension will not be there one day. 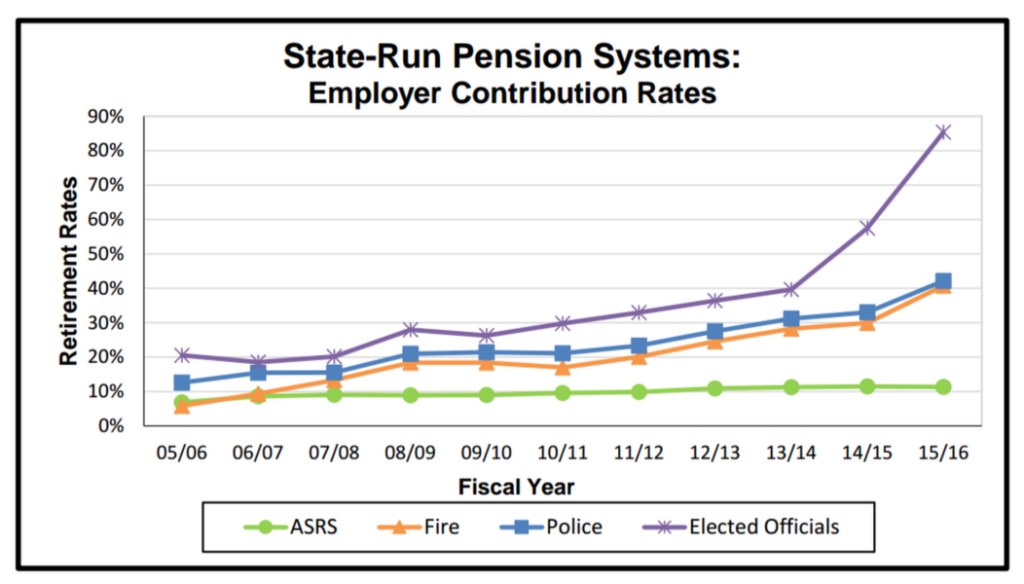 Should the special interest groups be able to buy city council candidates so they vote to raise our taxes?

To “fix” this issue the current leadership has decided they will buy the City Council and raise taxes by 23%.  This is typical of any politician.  If you can’t fix it let’s just keep taxing people until they can no longer afford to live.  If we do not demand accountability then what stops this reckless investing from bankrupting the system a second time?

This is apparent in the public safety “question 1” which is being proposed in November to raise sales tax 23% from 1.75% today to 2.15% if it passes(more info). What system is allowed to risk billions of dollars of assets and if it is all lost allows for taxpayers to keep replenishing it? There is no responsibility and accountability here and PSPRS might as well keep investing in the riskiest of assets.  If they do well they make a great return.  If they don’t the taxpayer simply pays for the losses.  This is why the public safety management fundraises and spends thousands of dollars buying city council members every election, this is an example of special interest groups on a local level buying candidates who support raising our taxes for their own special interests.  This is what is wrong with our government today. 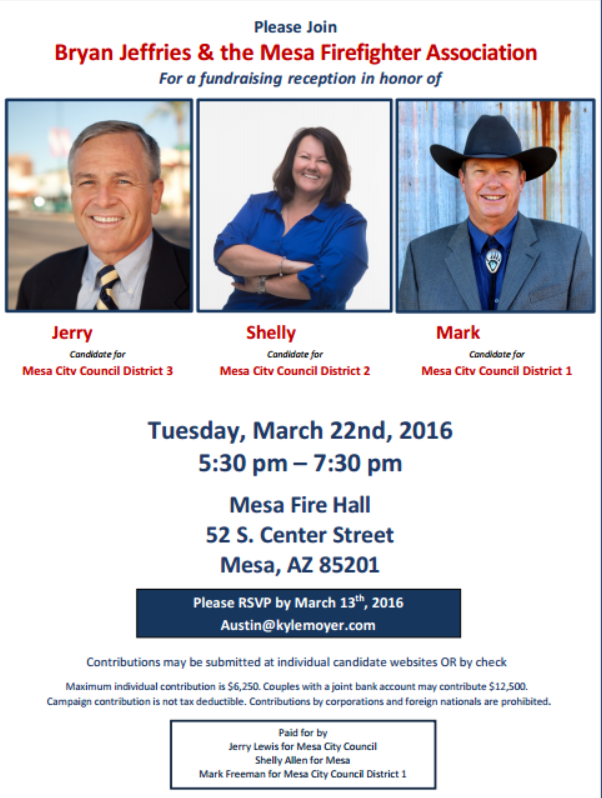 You can’t really buy City Council candidates… Can you?

Why has nobody talked about this issue before? 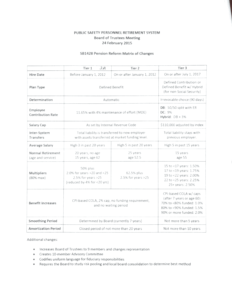