Mesa City Council, more corrupt than anyone in Washington D.C.

$100 million handout to ASU by Mesa Mayor is just wrong

There’s a ton of misinformation going around regarding the new downtown ASU project that I wanted to take the time to address. Everyone is entitled to their opinion on this issue but not to their own facts. The issues I will address below are as follows:

Did the taxpayers turn down ASU building in 2016?

Is this ASU building free as some would have you believe?

Will paying for this ASU building cause my water bills to increase?

One of the core problems with this ASU campus is how it is funded. The budgeted amount for this project is $100 million dollars. These monies are currently budgeted to come from our utilities. The utilities are also known as the enterprise fund it is essentially a bank account that is capitalized from the water, wastewater,  solid waste(trash cans), and gas bills. My passion is fueled by protecting the middle and lower class from being unfairly taxed. Energy inflation costs are slowly eating away at the discretionary income of our middle class and worse on the poor; it takes the income they need to survive. It is true that we have always used the utilities to fund the city’s operations. However, if you look at this chart below you can see that the water rates are consuming more and more of the income of our residents as a percentage of median income.  This metric shows that we are on a course of unsustainability. I am absolutely sure this is being felt in the bank accounts of our citizens.

If we maintain the current trajectory the picture is not a pretty one. Do you believe our rates are just and reasonable? 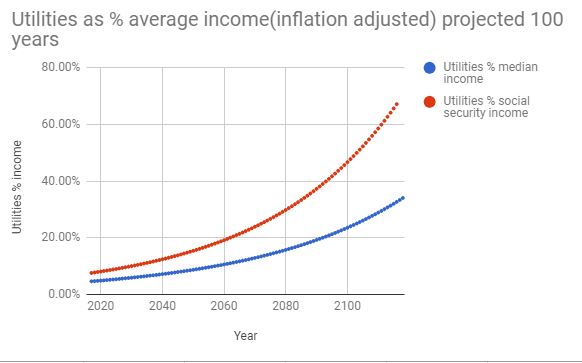 No, creatively Mayor Giles and downtown cohorts tried to pretend that this idea organically sprouted through the “Imagine Mesa” campaign and that we could “bring an ASU campus to Downtown Mesa – without a tax increase in Mesa”, reference – https://neighborland.com/ideas/mesa-az-to-bring-an-asu-campus-to

However, this idea was not organic or unique at all. Sean Huntington the author of this post was also the same person who did the original video when “Question 1” was on the ballot in 2016 and failed. This was merely a ploy to make people think this was a community inspired idea to further the Mayor’s agenda. Further this idea had 441 approvals (a metric to determine popularity). Do their voices matter more than the 81,933 voters to who said no to “Question 1” in 2016? http://www.mesaaz.gov/home/showdocument?id=21081 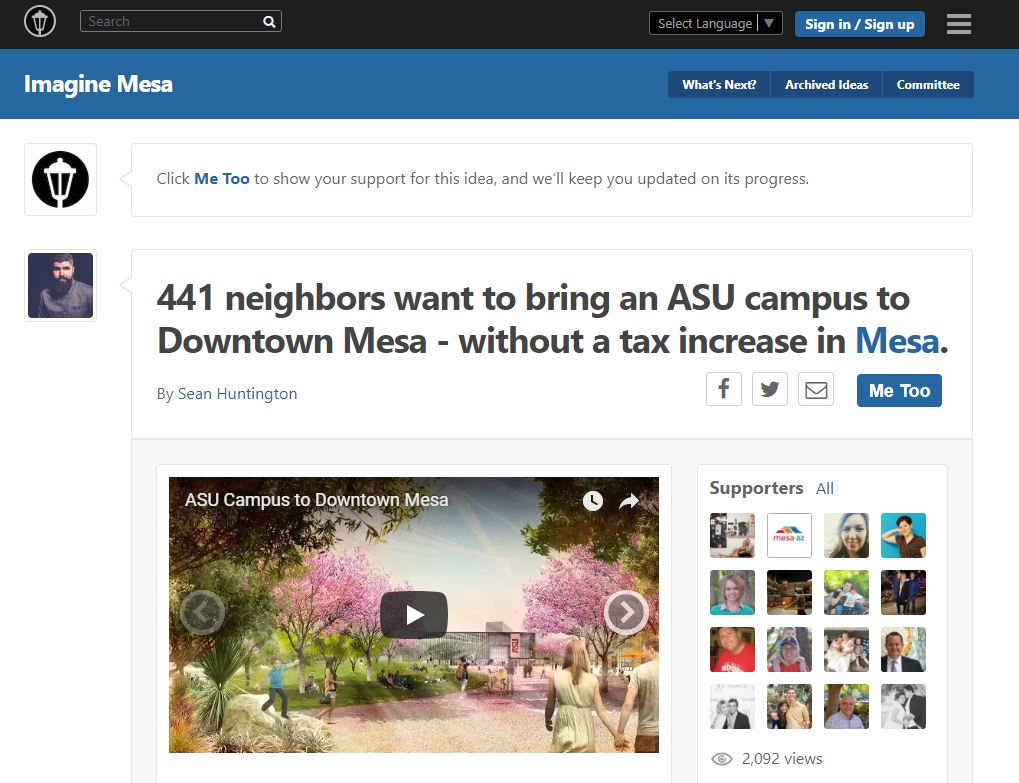 I keep hearing conflicting numbers about ASU. How much will this building cost?

Below you can see that staff is projecting that this building will cost $100 million dollars. There is a $6 million dollar placeholder for ASU(highlighted). This will be paid for using a 20-year bond which is assumed at 5% per staff estimates. 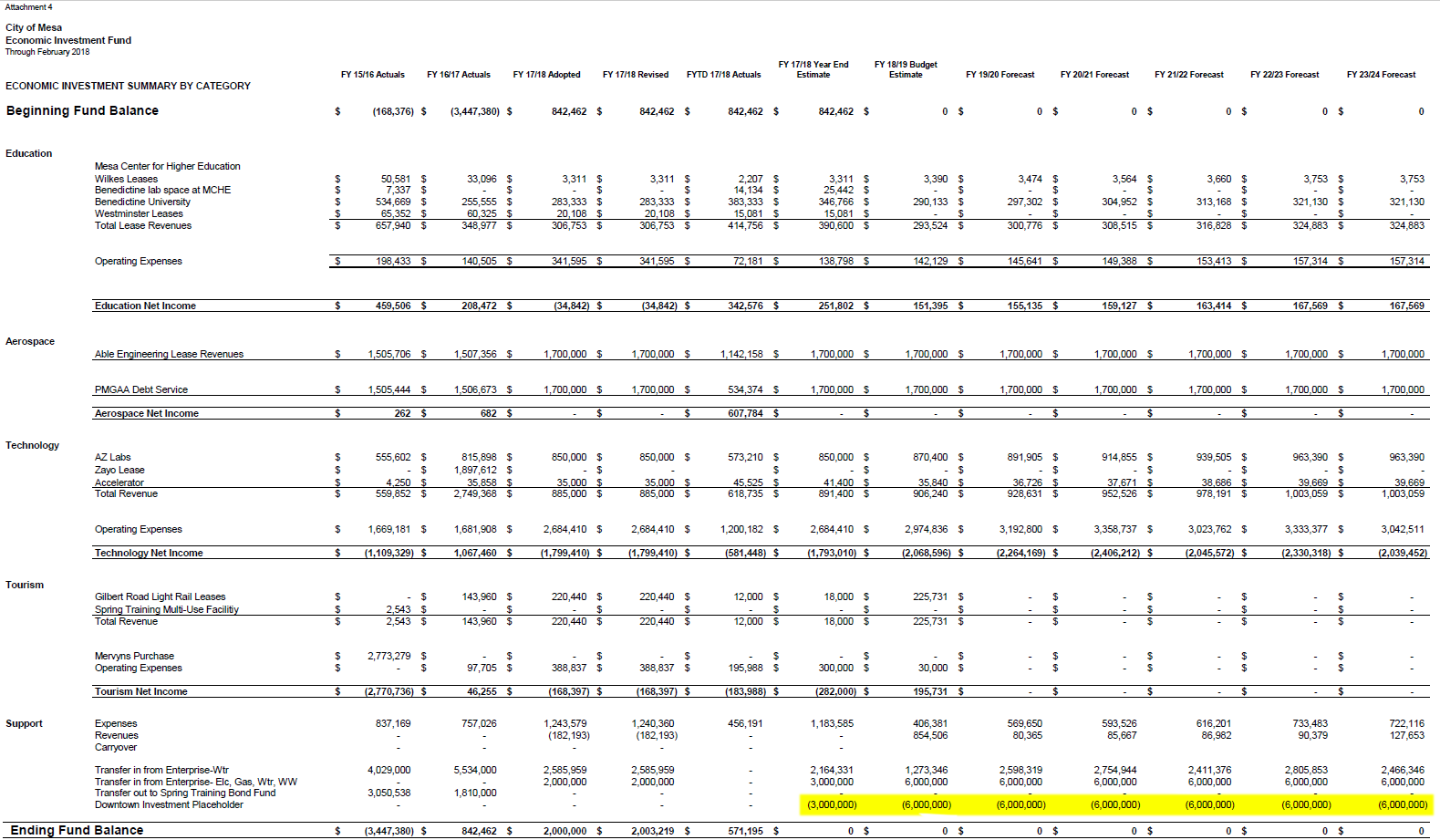 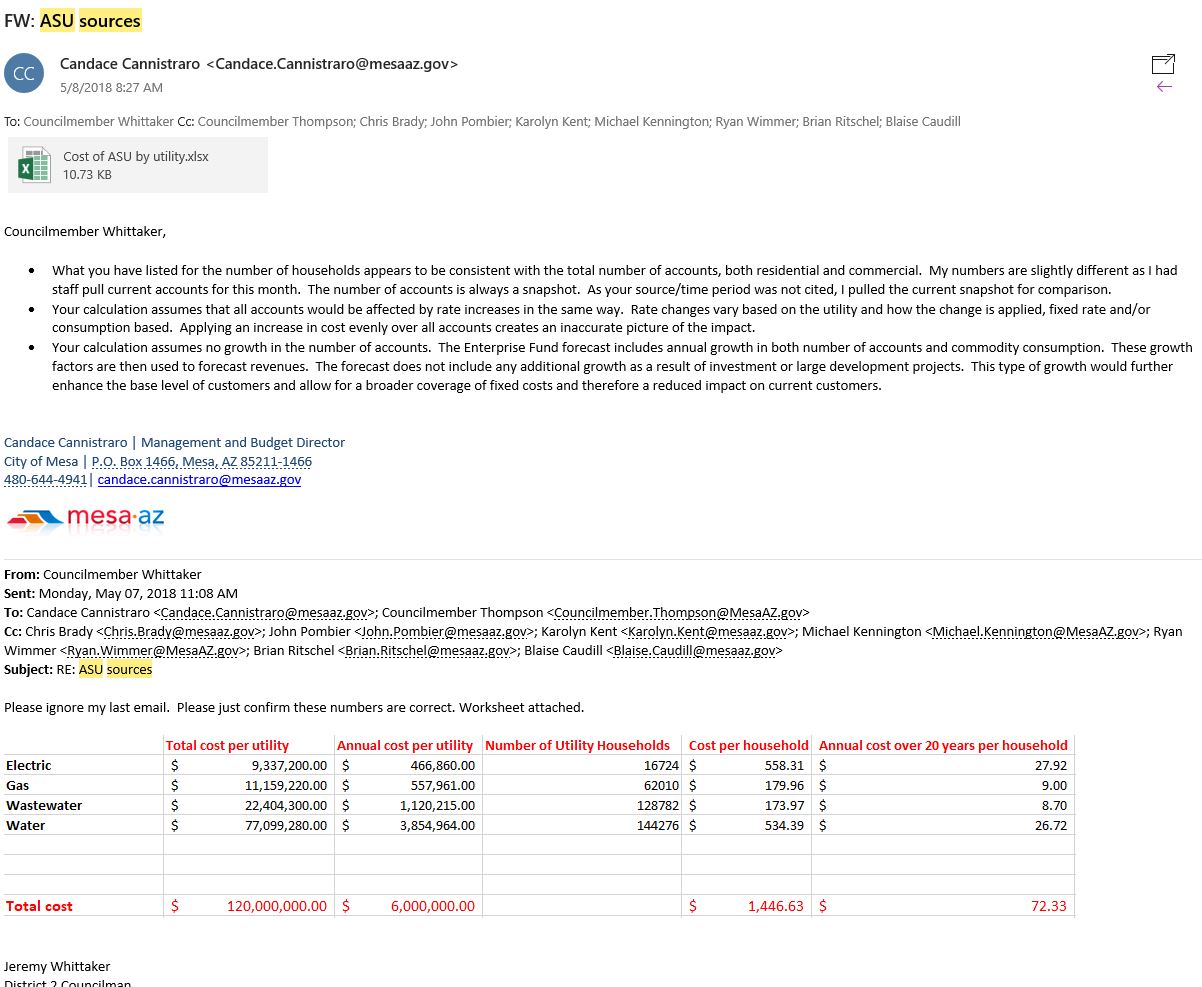 It is important to note that it is dishonest to talk about the construction costs of the building at $75 million dollars. Do we have cash to pay for the $75 million? No, we don’t. The way we finance this is through an excise sales tax bond. This is a 20 year bond in which staff uses 5% as an estimate to calculate costs. This is how $75 million in construction costs turns into $100 million to our resident’s water bills. For reference an amortization schedule can be found at the end of this article.

Why is there so much confusion on the price?

The people have been misinformed and lied to constantly. As a councilmember, I personally was mocked by the city manager citing, “fake news”. The video below was posted by a Facebook group pointing out the discrepancies in the costs. I personally find these demeaning comments from the city manager unnecessary and appalling. https://www.facebook.com/752993211756142/videos/762107290844734/

I keep hearing even though this building costs $100 million it won’t impact my water bill, is this true?

Every dollar added to the budget eventually has an impact on utility rates. Using common sense if you spend $100 million dollars out of the utilities the money has to come from somewhere to pay for this. Here is our budget directors response to the yearly cost (multiply by 20 for total). You can see here the bulk of the costs are being shifted to our water customers. If you believe that this building will not impact your utility rates, caveat emptor, next they will be selling us ocean front property in Mesa.

Per state statute, our rates must be “just and reasonable”. One has at what percentage of the median income do water bills become unjust and unreasonable?

The lie that is being propagated is ASU will not affect utility rate increases. The first important thing to note is that staff only projects and budgets for 5 years. So, technically yes this does not affect rates for the next 5 years, arguably. However, this sleight of hand forgets to mention that it draws down our reserves (savings) until they are projected to be depleted to 8% in year 5 of the budget. Further, one can deduct that this is a 20-year bond and only 25% of the costs are being budgeted for (5 years divided by 20 years total is 25%). This means $30 million for the first 5 years and $90 million for the remaining 15 years. We can conclude that someone has to pay for this other $90 million in years 6-20. It will either come in the form of a sales tax increase or more water bill rate hikes after year 5, this is not debatable. In this staff scenario below you can see the 5-year projection of our utility rates. Notice first that our budget is not balanced (net sources and uses line) this means we’re slowly depleting our savings year after year. We eventually draw down to 8% in fiscal year 23/24. We are required by policy to maintain 8% reserves (savings). This means in year 6 we’re in trouble. As highlighted we just depleted all of our savings from 25.2% to 8 %. 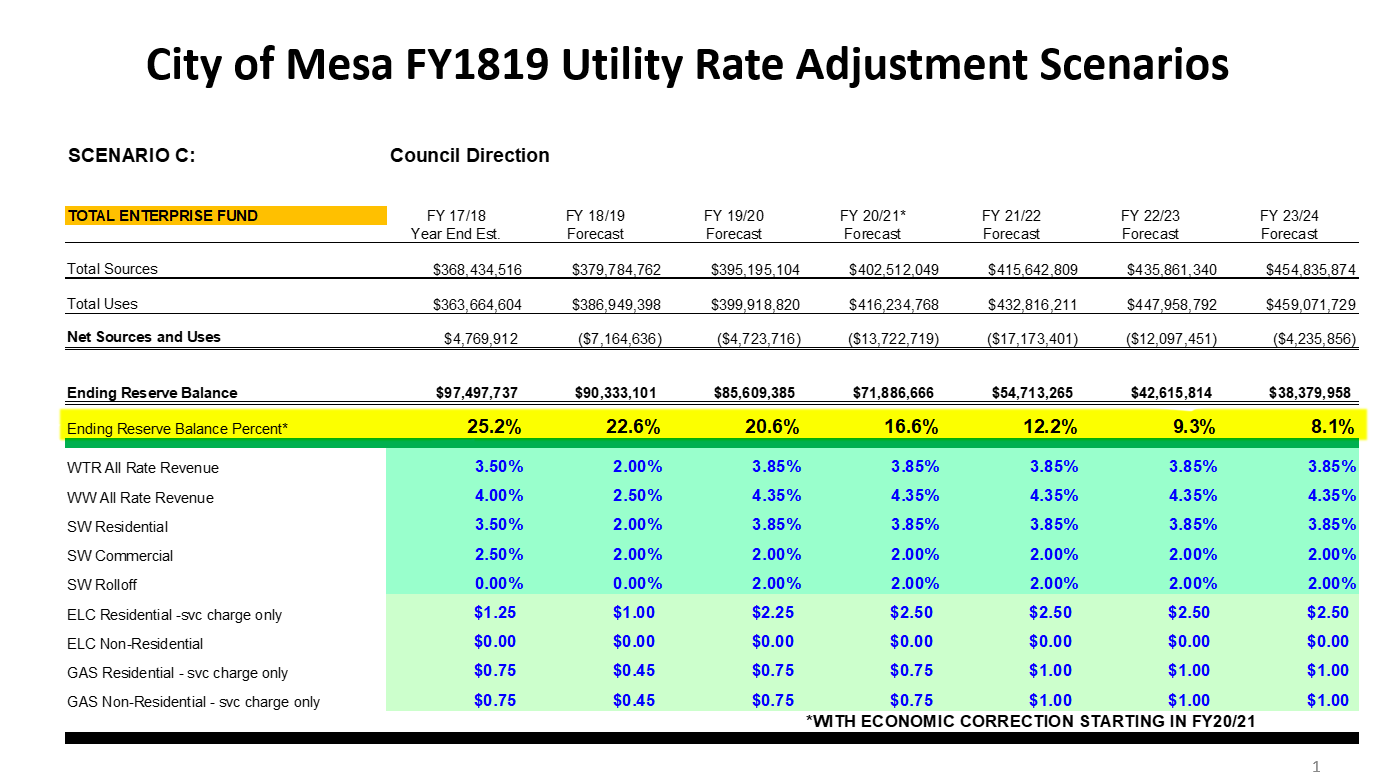 Isn’t ASU a state public university that we should just help out?

ASU is ran like an enterprise. The President, Michael Crow, is the highest paid public university President in the country according to Forbes. Reference – https://www.forbes.com/sites/laurensonnenberg/2017/07/17/the-top-paid-public-university-presidents/#6f14d534114c

ASU sent three lobbyists to convince us this deal was good for Mesa. Rick Neimark, Angela Creedon, and Matt Salmon. Respectively they make $229,000, $180,000, and $285,000 a year. How does this stack up against your salary? When there is that much money involved you can make any project look profitable. One has to dig into the details to find the fine print. Reference, http://www.statepress.com/article/2017/04/spinvestigative-salary-database

Below is ASU’s net position (an overall indicator of financial health) vs. the City of Mesa’s. You can clearly see they can afford to pay for this building more than the citizens of Mesa can. These charts below show that as Mesa’s net worth is declining year after year while ASU is doing just fine. 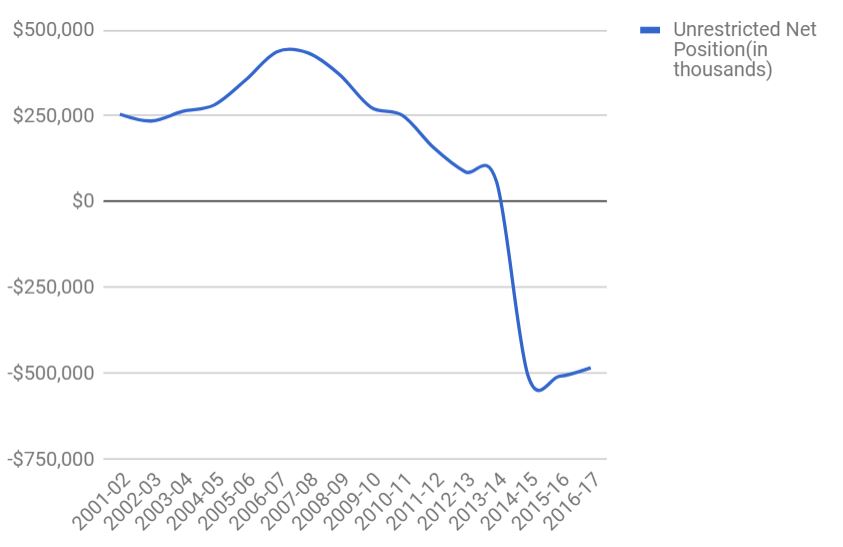 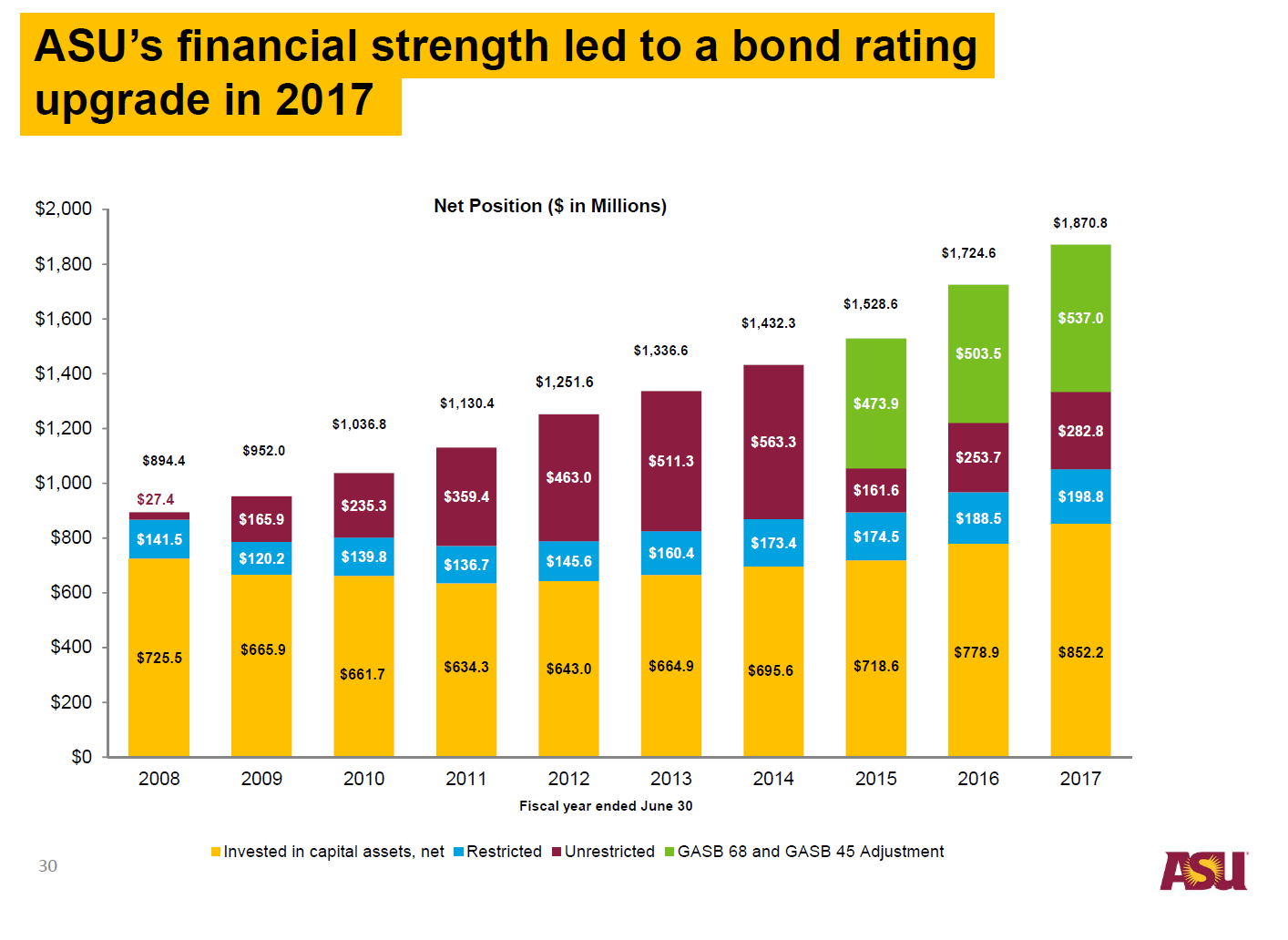 What about all this additional promised revenue?

Below is a dirt field known as “site 17”. Proponents will have you believe future assumed revenues from projects like this are going to pay for ASU. To make these connections is purely speculative at best. Furthermore, all the projections for increased utility revenue show the revenue as if it is direct profit. It fails to account for any of the overhead or cost of goods sold that any person with minor knowledge in accounting or business knows is necessary to determine true profit to the city. 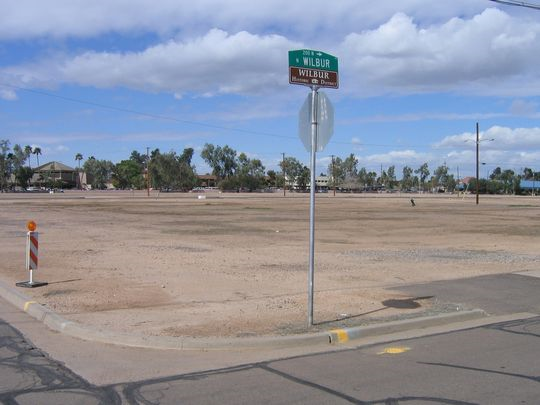 The voters already turned this down, to argue the contrary is being dishonest.

There were only two items under “Question 1” from 2016. Public safety and ASU. The reason these were coupled together is the powers that be understood the voters would not approve ASU. Given that public safety sales taxes always pass the two were put under one ballot measure. This ballot measure still failed. 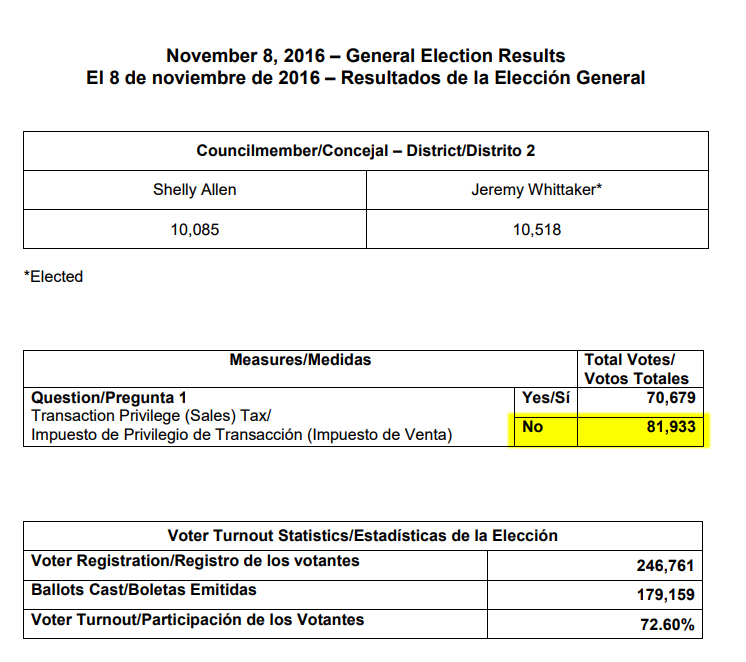 Is $75 million really a lot of money?

If you were to take $75 million and assume the S&P index as a benchmark for performance an investment $75 million would be worth $428,059,433,000 dollars, yes that’s billion. With the proposed contract for ASU paying the lease we’ll generate a mere $10 million dollars. This pales in comparison.

Why do you hate ASU?

I do not hate ASU. I would welcome them with open arms if they paid their own way to build a campus in downtown Mesa.